This one’s for Chugger.

There’s no need for me to tell you how I was feeling as we approached Tanjil Bren, our starting point for the ride. It’s a small town (pop. 110, including surrounding areas) but does have a carpark and public toilets, both important facilities after a two and a half hour drive. We had another good turnout for this ride. Ten of us meeting and riding together, whilst one (Mulgabill) had to go solo and start an hour earlier as he had home commitments. Surprisingly this week there were no missing items and even more surprising was that Beetle didn’t try to fire us up by playing “What does the fox say?” on his iPod. All agreed this was a great start to the day. There was something missing though. There wasn’t the usual air of anticipation, no ridiculously bold predictions. These were instead replaced with nervous jokes and a sense of inevitability. Baw Baw’s reputation had not been forgotten by anyone.

It was cool rolling out of the carpark and there was no warm up time at all because the road drops for three and a half kilometres. Normally this would not be any cause for concern, but on this day there were various comments about having to tackle the climb to finish the ride. Finally we were at the bottom and able to start riding. We knew that it was all uphill from this point, twelve kilometres to the top, but we also all knew that the first five kilometres were relatively gentle. For as long as I’ve ridden with the Greenwood Peleton any kind of climb would see some kind of split form in the group. Mt Baw Baw would be no exception, but not on this part of the climb. Nobody was willing to expend any unnecessary energy here, and so as a group we all rode together to the base of “the real climb”.

After crossing a branch of the Tanjil River we got our first glimpse of what we’d come to tackle. The road ahead of us was pitching skyward. I was riding with Squeaker at this point and I heard him say “Did you see that?”. Those who had any gears left to drop into were doing so. Now it was time for the group to split. As expected Hunter, Mountain Goat, Whippet and Beetle all moved to the front. As Beetle rode past he was reading out the gradient coming from his GPS. “10%, 12%, 15%, 17%, 19%”.  Beetle’s a great guy, and he tells a great story, but this was not one I wanted to hear. We’d only been climbing for a couple of hundred metres but even at this early stage the only breath I had left was to shout at him to shut up. Not long afterwards I was riding on my own, the only rider in sight being Beetle an insurmountable fifty to a hundred meters ahead.

By the 1.5km mark I was almost done. There were still five kilometres to go but the unrelenting gradients made it feel like one hundred. My promise to myself that I would not  get off the bike became a mantra. “I will not stop, I will not get off my bike”. So I did the only thing left that I could. I started to zigzag my way up the road.

At the three kilometre mark I crossed paths with Mulgabill on his way back down the mountain, but I was unable to do little more than raise an eyebrow in acknowledging his ride. By this stage I had been riding for 30 minutes. That’s right folks, I was riding an average speed of 6km/hr. In fact there were many times throughout the climb that my GPS wasn’t registering a speed at all and would temporarily stop the device. Now, not only did I have to suffer the physical torment, but there was the added torment of having to hear the GPS switch itself off, then on, then off, then on…beep beep, beep, beep beep, beep…

52 minutes after starting the climb I was done. I’ve done a lot of climbing over the years, but finishing this short climb left me with the kind of joy I’d only ever experienced completing the final climb of the Alpine Classic. I was so relieved to be done that I spontaneously let out a yodel, not too dissimilar to that of Jessie from the Toy Story movies. I was greeted with a cheer by Hunter, Mountain Goat, Whippet and Beetle who had arrived before me in that order; Hunter in a sensational time of 41 minutes. For some reason getting off the bike and getting my 7 Peaks Passport stamped became my single most important task. I felt like the only way I could make the ride real was to get that stamp.

It was now just time to relax, talk to the guys and wait for the rest of the group to get to the top. As each of them finished they were also greeted with a cheer, and it seemed the cheers got louder and louder. The cheers were not patronizing ones, they were cheers of  encouragement, support and acknowledgement of a great effort. The last two guys to make it were Squeaker and Chugger, riding in together as mates helping one another all the way. It was a fitting finish because although we all made it in different times, we all made it up, in our own time, in our own way.

On this day, we were all Chuggers. 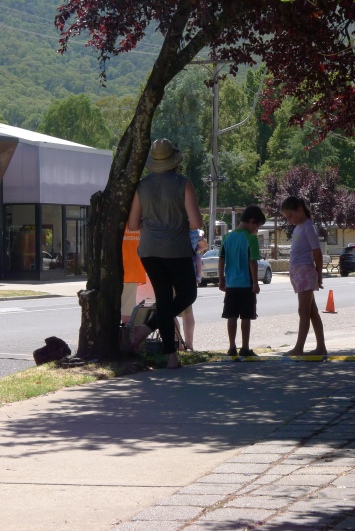 The support crew waiting in Bright for my return from Falls Creek. 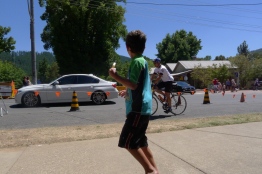 Finally, something to cheer.

The support crew. It was great having them there but after they’d had their own share of lollies were more interested in getting back to the river for a swim than waiting for me to get going.

The support crew at the finish line awaiting my arrival.

Riding to the finish line is always nice, no matter how hot and tired I’m feeling.